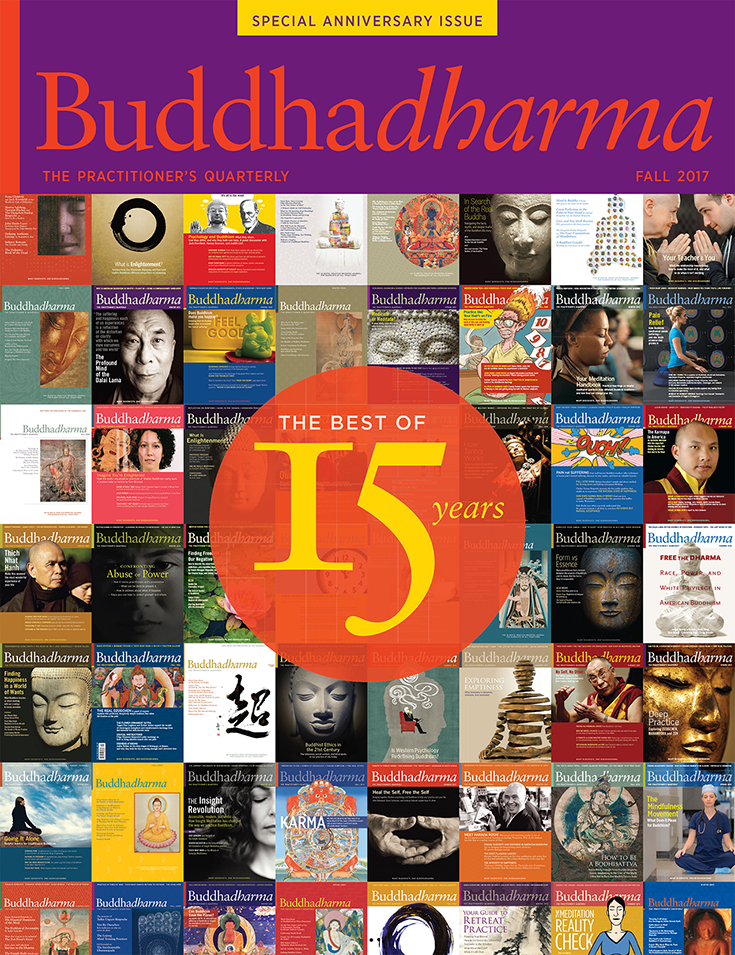 In this special anniversary issue, now available, we celebrate with a selection from some of the best teachings and articles we’ve published over the last fifteen years.

Welcome to the Issue / Commentary

Section I: The Path Is Not Without Obstacles

From illness to disillusionment to the meditator’s high—the challenges of the Buddhist path seem endless. But they’re always fertile ground.

Do You Know Your True Face?, by Lama Rod Owens

The Joy of the Lonely Dancer, by Judith Simmer-Brown

Practice in its many forms is at the core of every Buddhist tradition. It’s the way we bring the teachings to life and make them our own.

If It Sounds Too Good to Be True…, by Mark Unno

Section III: At the Heart of It All

Whether you call it wisdom, buddhanature, realization, or enlightenment, the Buddhist teachings point to an experience that is closer than you think.

Becoming the Mountains and Rivers, by John Daido Loori

Section IV: We’re in This Together

Buddhism in the West is more than its practices and teachings. It’s a dialogue—about authenticity, culture, psychology, racism, enlightenment, and more.

We’re Not Who You Think We Are, by Chenxing Han

A Challenge to Buddhists, by Bhikkhu Bodhi

Just Now Mind, by Dae Kwang; The Meaning of Lineage, by Pema Chödrön; The Future Is Now, by Thich Nhat Hanh; Think Twice, by Dzongsar Khyentse Rinpoche; Seeking Bedrock, by Charlotte Joko Beck; The Sound of Invisibility, by Susan Yao; The Gentle Rays of Dharma, by Gaylon Ferguson; A Plastic Red Ring, by MuMun Algernon D’Ammassa

Rory Lindsay reviews Catholicism and Zen by Richard Bryan McDaniel; The Life of My Teacher: A Biography of Ling Rinpoche by His Holiness the Dalai Lama, translated by Gavin Kilty; Early Buddhist Meditation, by Keren Arbel; Older and Wiser, by Mu Soeng, Gloria Taraniya Ambrosia, and Andrew Olendzki; The Just King, by Jamgön Mipham, translated by José Cabezón; Anarchy in the Pure Land, by Justin Ritzinger; and Zen Echoes, by Beata Grant