Jason Gots and his sister were never happier than when they hunted the elusive wild blackberry. Years later, he realizes the magic is in the search. 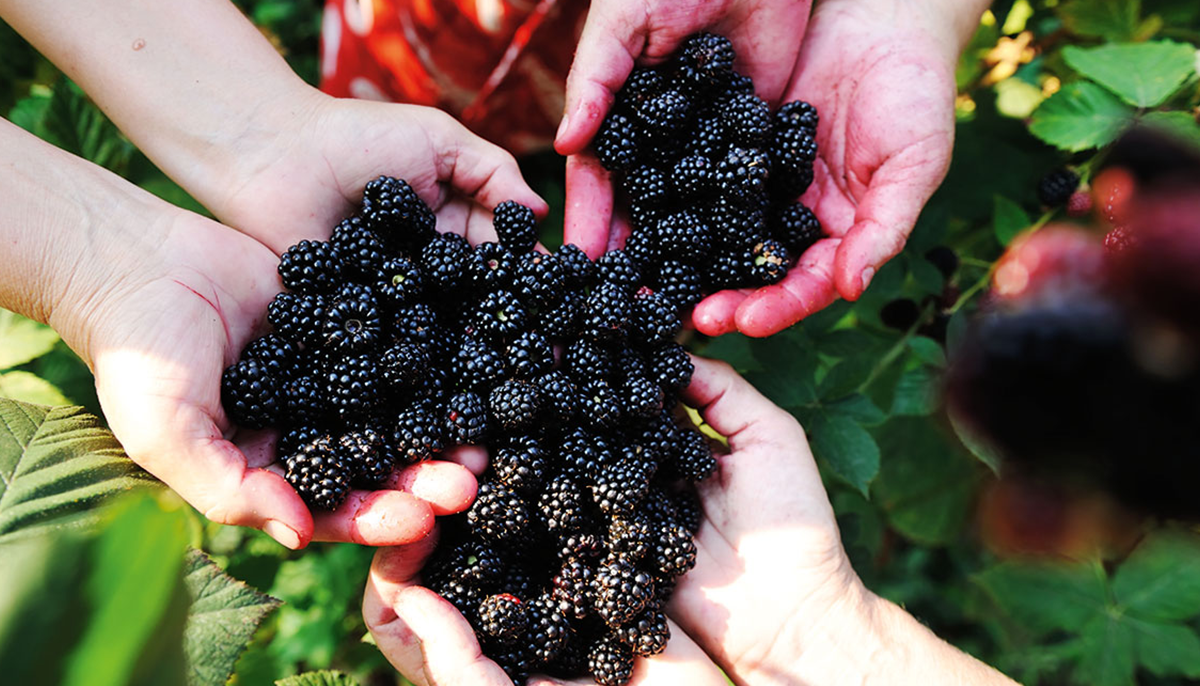 In the fantasy books I loved to read as a kid, when children entered a magical world there was always a threshold—a wardrobe, a tollbooth, a certain pattern of turnings through the labyrinth, some borderland to cross between humdrum reality and the world beyond.

Every summer for most of my childhood, my family and I vacationed on an island. Islands are a kind of fairyland too; we’d take a trip across the nameless, featureless borderland of water (on a ferry that swallowed up our wood-paneled station wagon with us inside it). Then we were there, in that other place, and everything was different. Everything was tinged with magic.

How is it possible, I worry, to aspire to freedom and at the same time be utterly present?

I’ve read and heard several different versions of the story of the Buddha’s enlightenment. In all of them, after mastering the austerities of various yogis, he comes to the conclusion that starving in a cave is not conducive to attaining the freedom he seeks. Instead, he tries recalling a happy childhood memory—a day spent in a field with his father—and uses that chitta (mind state) as the foundation of his successful meditative practice.

On the island, there were many magical moments, many happy chittas I can draw upon, all these years later, for my own practice. But the happiest of all was berry picking.

Blueberries are hardy and long-lasting, and they were abundant on the island. Blackberries were the rarer prize. They grew low to the ground, on threatening vines covered, like wasps, in stinging thorns. They grew briefly, becoming ripe for a week, maybe two at most, in late August. And they were fragile. Their bulging, fly-eye bulbs popped easily when we tried to pick them, and their purple ink looked like murder evidence on our hands for days afterward.

I was around nine years old at the height of our blackberrying mania. It would be a decade before I first read a Buddhist text, two before I consciously meditated for the first time. But in many ways, blackberrying was an advanced, instinctive meditative practice.

For one thing, there was the one-pointed attention to the challenge of spotting ripe blackberries in the scramble of undergrowth. My sister and I were scanning, scanning all the time. Our minds held fast to the image of the ur-blackberry, its Platonic form: fat and black and at peak juiciness, in that one perfect instant before insects and the summer sun began to maul and desiccate it. Like a one-pointed object of meditation, this ultimate blackberry was both there and not there. We had to hold it lightly, loosely, in the mind’s eye as we scanned for its lesser cousins, knowing there was every chance of finding no blackberries at all, let alone the ultimate one.

On the wind-swept island, blackberry bushes grew to around five feet, taller than we were back then. While my parents (with a bird’s-eye view above the hedges) kept track of our location, my sister and I were free to head nowhere in particular. We were lost and happy, directionless and anchored by one-pointed purpose.

As a grown-up student of the dharma, I often get tangled up in some version or other of this paradox: how is it possible, I worry, to aspire to freedom and at the same time be utterly present? What does acceptance (of what is) have to do with faith (in what could be)? In the blackberrying mind, there’s no paradox, no contradiction. Blackberries or no blackberries, the hunt is its own reward.

Any blackberries we found rarely made it home. I’d pop one in my mouth and hold it there, running my tongue over the textured surface, then chomp down all at once and let the supernova of juice explode across my taste buds. Even then I understood impermanence—how the moment of consummation is also a kind of vanishing. Soon my sister and I would squabble, grabbing at the last few berries, accusing one another of greed, squandering all the berry-picking chitta of the past few hours, along with any good karma it might have brought.

Fairylands in fantasy books are a metaphor for the imaginative freedom of childhood. In the harried, overworked American culture I grew up in, so was summer vacation. Inspired by a memory of childhood happiness, the Buddha aimed to dissolve permanently the threshold between “real” adult life and the freedom we hold in memory as a fall from childhood grace. For him, what we call ordinary life is the illusion. Freedom is not a brief holiday, a nostalgia for things forever lost, nor a magical impossibility. It is the truth at the heart of all things.

As a lay practitioner in twenty-first-century New York City, I often lose connection with that truth. For example, I’ve spent the past six months worrying over spreadsheets I’ve made of potential high schools for my son, obsessing about his future, turning an abundance of opportunities into my own special hell-realm. Blackberrying mind can help me here.
Keep moving. Keep searching. Find joy in the process. Freedom is accepting that you can’t control the outcome.

The number of popsicles this recipe will produce depends on the size of the popsicle molds you use.

Combine ½ cup water and ¼ cup sugar in a small saucepan. Over medium heat, bring to a boil, stirring occasionally, until the sugar has dissolved. Remove from the heat and allow the mixture to come to room temperature. Add the rose petals and lemon juice and purée in a blender. Pour the rose mixture into the tips of popsicle moulds and freeze.

Combine 2/3 cup water and 1/3 cup sugar in a small saucepan. Over medium heat, bring to a boil, stirring occasionally, until the sugar has dissolved. Remove from the heat and allow the mixture to come to room temperature. Add the blackberries, lemon juice, and salt. Purée in a blender. Pour the blackberry mixture into the Popsicle moulds on top of the frozen rose petal mixture and freeze.

Jason Gots is the producer/host of the Think Again and Clever Creature podcasts and author of the memoir Humanity is Trying (HarperCollins).