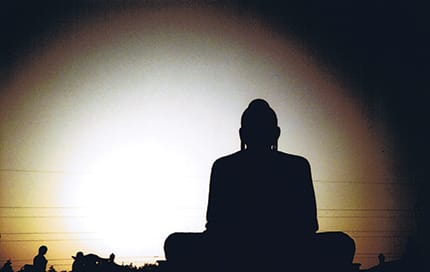 Imagine opening a book about what we would today call Buddhism and reading that it is an Egyptian religion and that the Buddha was a former Egyptian priest exiled from his country during a Persian invasion twenty-three hundred years ago. Or think of reading, in a different treatise on the Buddha, that “We are compelled therefore to believe… that Buddha and [the Norse god] Woden are the same deity, and consequently that the theology of the Gothic and Saxon tribes was a modification of Buddhism…” These views—the first from a mid-eighteenthcentury Westphalian physician, Engelbert Kaempfer, employed by the Dutch East India Company, the second from the nineteenth-century Anglican biblical scholar George Stanley Faber—seem wildly improbable to us now; not only wrong but spectacularly so. Yet as Donald Lopez, Jr.’s new book demonstrates, ideas such as these are part of the history and circuitous journey to what we now think of as the correct understanding of the Buddha.

From Stone to Flesh: A Brief History of the Buddha tells a complicated tale. It is, like the author’s many previous works, fascinating, erudite, and engagingly written. Readers will come away enriched by it, often astonished, and occasionally exasperated. The book is not a biography of the Buddha in the usual sense, although it does recount many wonderfully varied biographies of the Buddha. Nor is it a history of Buddhism either, exactly, although readers will be enchanted by intriguing and little-known facts about the history of Buddhist ideas, texts, and societies. Rather, it is more properly a history of the Buddha himself, specifically of how we have come to know—or at least think we know—the historical founder of a world religion called Buddhism.

Prior to the revolutionary work of a brilliant nineteenth-century French textual scholar named Eugene Burnouf, Europeans struggled to make sense of the Asian religious communities they encountered through trade, missionary projects, empire-building, and the travel writing of other colonials. Lopez’s book recovers the long period before Burnouf’s groundbreaking work, during which Europeans had little if any ability to read or even speak Asian languages. They often had no idea that the local god they saw in one place had anything to do with the local god of another. “For them,” writes Lopez, “the Buddha was just another idol worshipped by pagans in foreign lands, an idol known by various versions of his local name… his story told as various garbled versions of his local biography, with unseemly elements often added.”

In fact, early Europeans who wrote about the carved and painted Buddhist images they encountered often could not tell if the Buddha was male or female, to say nothing of how baffled they were by the mysterious figure’s race, teachings, and historical origins. Readers may enjoy the curious, vicarious experience of approaching Asian statues, paintings, and stories through these naive colonial eyes. One of Lopez’s intentions seems to be to demonstrate that despite their prejudices, early visitors to Asia saw everything with fresh and startled vision, open sometimes to qualities we no longer fully see.

From Stone to Flesh describes the evolution of European ideas and literary images of the Buddha, beginning with the earliest mentions (Saint Clement of Alexandria in the third century CE, writing about the “precepts of Boutta”) and moving through a wildly diverse parade of missionaries, adventurers, scoundrels, colonial officials, scientists, accountants, aristocrats, priests, and scholars. Lopez traces the extraordinary arcs of cross-cultural encounter, misunderstanding, attraction, prejudice, and fantasy that shaped Western notions of the Buddha. While From Stone to Flesh does not attempt a complete history of the interactions between Buddhist societies and Western Christian ones, Lopez includes accounts of this history throughout the narrative, adding much to our knowledge of Buddhism in the colonial period.

One of the book’s charms is its use of multiple voices, many of them quite strange to our ears. Incorporating substantial excerpts from the original prenineteenth-century European authors, the book is, as Lopez writes, “in many ways… a work of ventriloquism.” Sometimes these authors’ interpretations are almost prescient in their insight into Buddhist materials; more often they are startlingly, sometimes hilariously, mistaken in ways deeply revealing of their prejudices. The Buddha chronicled in the book’s four chapters (“The Idol,” “The Myth,” “The Man,” and “The Text”) appears frequently as a dangerous Satanic manipulator blocking the spread of Christian missionizing; sometimes as a planet (Mercury), believed to be the mythological “private secretary” to the Hindu god Shiva; as an Egyptian; as a hybrid Greek philosopher; as a pair of twins, one of whom impersonated Christ; and in many other forms. The names the European writers ascribed to the Buddha, which before the mid-nineteenth century were often assumed to be the names of many different deities, are so extensive that Lopez includes an appendix of three hundred such variations. Among the most familiar, which readers may recognize as transliterations of the name of Buddha in various Asian languages, we find Fo, Chaka-Mouni, Xaka, Somona-Codom, Schakscha-Tuba, and Budsa.

Offering a corrective counterpoint to Western inaccuracies, Lopez juxtaposes passages from Buddhist texts with the writings of missionaries, adventurers, and colonial officials, showing precisely where misunderstandings occurred and giving a sense of how certain European prejudices, whether Catholic, Protestant, imperialist, or humanist, may have shaped those errors. Yet as compelling as this corrective project is, part of the book’s purpose is explicitly the recovery of these European voices—the voices of early pioneers (all of them men) who struggled, sometimes heroically, to make sense of the deeply alien cultures about which they wrote.

Lopez is interested in tracing the specifics of the conceptual shift toward our present-day understanding, in which “there is a single Buddha, beloved by both worlds [Asia and the West],” which of course seems utterly natural to us now. Few people reading this review would question the idea that Shakyamuni Buddha was an historical figure of Indian origin, founder of one of the world’s great religious traditions, and a peaceful humane teacher of meditation, ethics, and insight into the nature of the mind. Yet Lopez’s underlying interest is to complicate our easy grasp of this particular idea of the Buddha—to ask where and how this idea developed, especially outside of Asia, and consider whether our contemporary views have displaced important ideas about the Buddha, Buddhists, and Buddhism.

Lopez argues that our modern view of the Buddha, as a historical figure of Indian origin who founded a religion called Buddhism, was “born in Paris in 1844” when Eugene Burnouf published his Introduction a l’histoire du Budhisme indien (Introduction to the History of Indian Buddhism). Indeed, Lopez playfully pokes at readers’ modern understanding as he reveals the dubious path to historical certainties: “The new Buddha emerged fully formed from the brow of a single scholar, who never set foot in Asia. And not only did this new Buddha displace the old idol of Europe; in important ways he displaced the Buddha of Asia.”

From Stone to Flesh urges us not only to recover an often forgotten period of our own intellectual past but also to ask what might have been lost, as well as gained, when a single international, global, historicized, humanist Buddha came to be shared by Buddhists and scholars in both Asia and the West. Lopez prods at the complacency of our modern worldview by asking us, “Was something lost in the march of scholarly progress, did something disappear when weathered stone turned to smooth flesh, when the idol turned into an ‘image’?” He suggests, “Perhaps the collapse of many gods into a single human Buddha effaced a level of detail, of specificity, of locality that can no longer be discerned, yet was glimpsed long ago by the eyes that could still be captivated and astonished, eyes that could not read, eyes that could only see.”

Thus Lopez does far more in this book than simply chart the often fantastical misunderstandings and willful prejudices of the European writers of earlier times. In the subtle and elegantly provocative style that readers may remember from Lopez’s earlier works, From Stone to Flesh ultimately asks us to reexamine the nature of the Buddha we think we know.

Lopez hints that we might in fact want to question aspects of the so-called “scientific” study of Buddhism that dates from Burnouf. Other scholars, such as Philip Almond in his indispensable book, The British Discovery of Buddhism (and Lopez himself, in earlier works like Prisoners of Shangri-la), have spelled out in detail how European “scientists” of Buddhism working in the shadow of Burnouf came to view Buddhist teachings as best preserved and most correctly understood in Europe by European scholars and not by Asian Buddhists. European (and later American) scholars in this mold believed Asian Buddhists had allowed Buddhism to degenerate and be corrupted with ritual, magic, irrational beliefs, and tantric practices. Least corrupt, in this European view, were the Theravada traditions of Southeast Asia; most corrupt were the northern and East Asian Mahayana traditions, with the worst degeneration being found in the Vajrayana Buddhism of Tibet. Lopez does not explore these points here in full, but he suggests we might want to question our acceptance of the globalized, modernist, and in many ways secularized idea of the Buddha that has become dominant in both Europe and Asia.

In the end, Lopez posits, we may have made mistakes ourselves, wise and well-informed as we are. Perhaps we should not have been so quick to replace the profusion of local presentations of the Buddha, each a focal point of supplication and prayer, with a single figure of rationalism, science, self-help, or even humanism. Perhaps we actually require the infinite local buddhas of miracle and devotion. Lopez opens the door to forgotten possibilities: “The Buddha of Bernouf, though alive in our imagination, is long dead… He is not worshipped, he is remembered… But the idols called Xaca and Fo and Sommona-Codom remain alive, animated by the rituals of the faithful, granting our wishes, speaking to us in our dreams, inspiring our aspirations. It was not a case of mistaken identity. We should restore the idols to their empty thrones.”

Annabella Pitkin is assistant professor of Buddhism and East Asian Religions at Lehigh University. She specializes in Tibetan Buddhism and Asian intellectual history.