Denise Leidy offers a brief history of Buddhist art, from the stupa to the mandala. 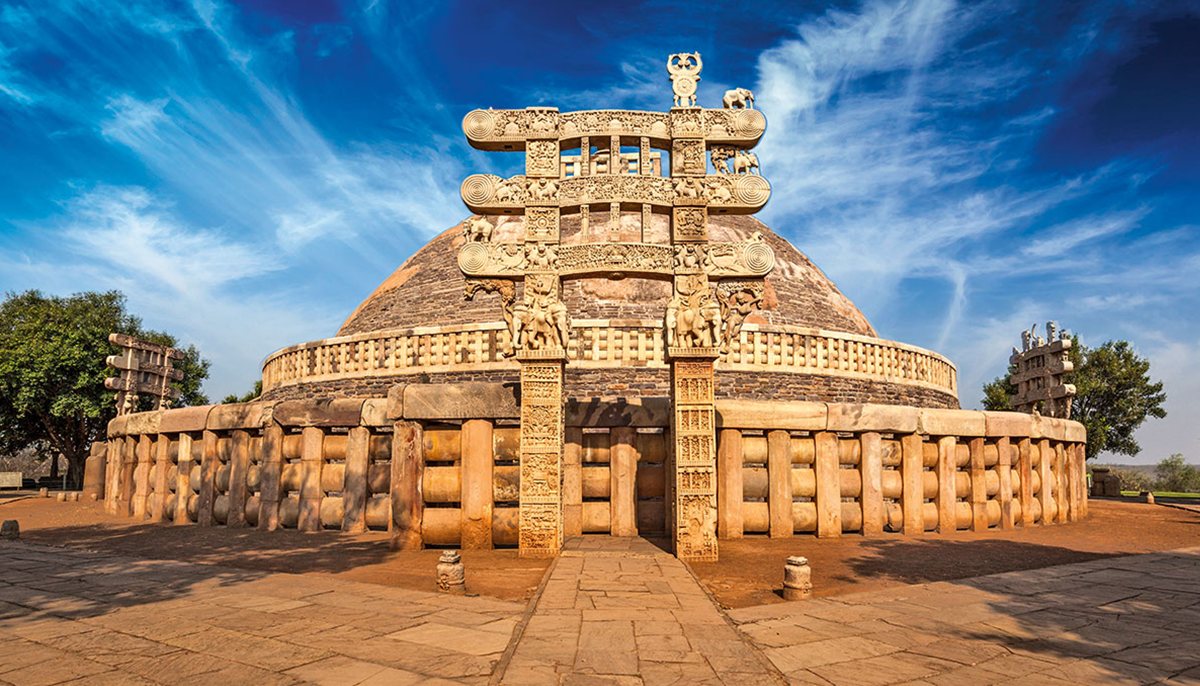 Fig. 1. The Great Stupa in Sanchi, India. These reliquaries were among the first examples of Buddhist art and over the centuries were built in different styles throughout Asia. Photo by Dmitry Rukhlenko / Alamy Stock Photo

Architecture, sculpture, and painting have always played a critical role in Buddhism. As well as serving as teaching aids for the practice and dissemination of Buddhism, they also act as important counterparts to written texts as a record of ever-evolving Buddhist beliefs and practices. In this short look at the history of Buddhist art, we survey five key developments in Buddhist iconography and how they reflect changes in Buddhism as it evolved in different eras and cultures.

The Stupa: Where Buddhist Art Starts

Surprisingly, there is little visual evidence for Buddhism in South Asia until the second to first centuries BCE., more than two hundred years after the death of the historical Buddha Shakyamuni. Among the earliest monuments still preserved are stone mounds, known as stupas, such as the Great Stupa at Sanchi in Madhya Pradesh, India (fig.1). These monuments mark the location of sacred relics such as the physical remains and personal belongings of important teachers and practitioners.

The Great Stupa, also known as Stupa I, is an important center for pilgrimage and devotion. It signifies the presence of the Buddha and other teachers and is circumambulated in a clockwise direction while chanting or praying. The four large gates placed in the cardinal directions around the Great Stupa help define this sacred space. They are decorated with narratives depicting the final and previous lives of Siddhartha, recording the paradigmatic story of his long quest for enlightenment. The Buddha is not shown as a human being in any of these scenes and is instead represented by a wheel, an empty throne, footprints, or even a small rendering of a stupa.

The Buddhas Appear as Human 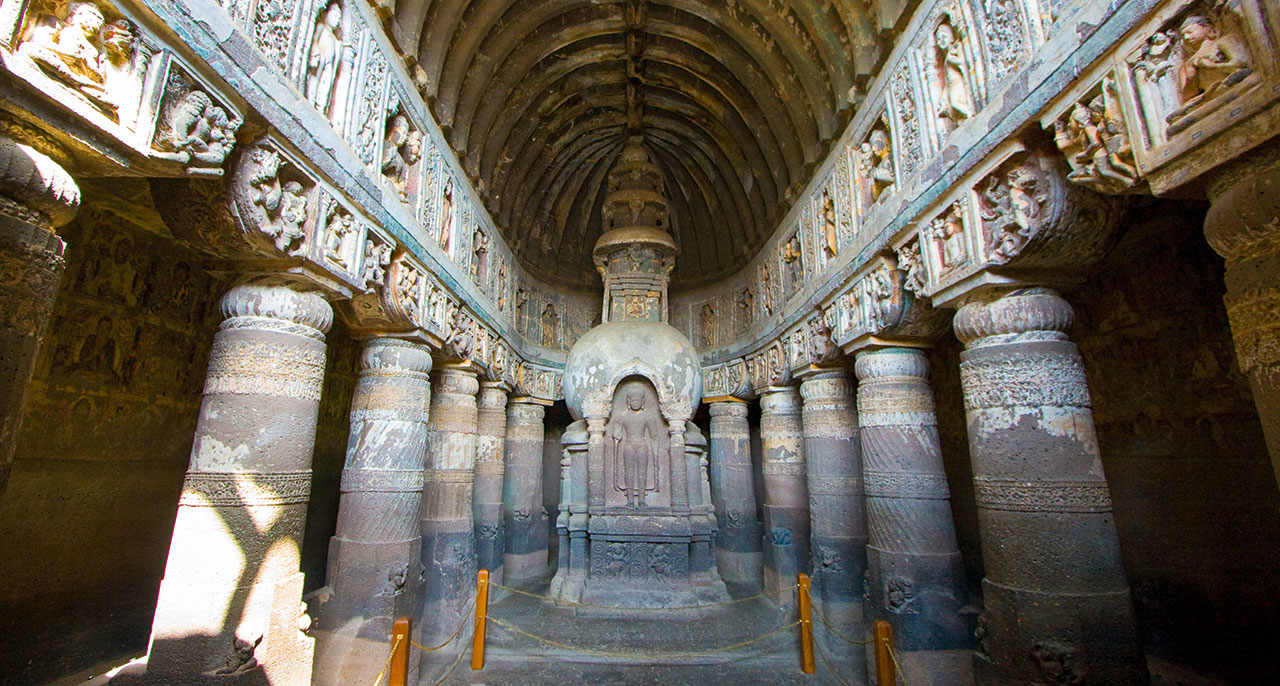 Fig. 2. In the 2nd and 3rd centuries CE, the Buddha began to be portrayed in human form, such as this standing Buddha in front of the stupa inside Cave 19 in Ajanta, India. Photo by Madeleine Jettre / Alamy Stock Photo

Representations of buddhas and other figures such as bodhisattvas as human beings first appear in India around the second and third centuries CE, presumably as a result of changes in practice at that time.

The Buddha in front of a stupa in Cave 19 at Ajanta (fig. 2) illustrates the standard features that developed in India at this time in the representation of Buddhist deities. The Buddha is portrayed as youthful and powerful; has supernal markings such as a bump on the top of the head (ushinisha) and a tuft of hair of representing the third eye of wisdom (urna) in the center of his forehead; and holds his hands in ritual gestures (mudras). In this particular statue, the mudras signify gift-giving (lowered left) and reassurance (raised right).

Like all Buddhist deities, this standing Buddha, as well as the small buddhas in the upper band of Cave 19, wears traditional Indic monastic clothing, including a sarong-like lower garment and a large rectangular shawl that covers both shoulders. While the small standing buddhas hold their hands in the same gestures as the primary Buddha in the stupa, the seated figures display the gesture of teaching, or turning the wheel of the dharma.
Representations of multiple buddhas, which signify the existence of celestial buddhas in the past, present, and future, further illustrate the changes in Indic practices around the fourth and fifth century. This period was marked by the development of a large Buddhist pantheon, including multiple buddhas, bodhisattvas, famous monks and adepts, female deities, and enlightened protectors.

Ajanta, which is located in Maharasthra province, is one of the most famous cave-temple complexes in India. Such manufactured structures, generally built into hills in remote locations near major trade routes, are also found in Central Asia and China. They include spaces for worship, such as Cave 19, plus meditation cells, living quarters for monks, libraries, and kitchens.

Fig. 3 The Buddha’s disciples who had achieved personal liberation (arhats in Sanskrit, luohans in Chinese) began to appear in East Asian Buddhist art in the 8th century. “Luohan manifesting himself as an eleven-headed Guanyin.” Zhou Jichang, Chinese, Song dynasty, about 1178. Ink and color on silk. Photo © Museum of Fine Art, Boston.

The five arhats, known as luohans in Chinese, represent another fascinating example of the development, and spread, of Buddhist imagery throughout Asia.

Although they are mentioned in Indian texts, these immediate disciples of the historical Buddha Shakyamuni are not depicted in South Asian art. Understood to remain in the phenomenal world to protect Buddhism, particularly during perilous times, images of the arhats first appear in China in the eighth century, and by the tenth have become important icons in East Asian practice.

This twelfth-century Chinese painting (fig. 3) is part of a set depicting five hundred arhats (the number expanded over time). It shows five arhats—four standing and one seated—wearing the traditional clothing of Indian monks. The seated figure is transforming himself into the eleven-headed manifestation of bodhisattva Avalokiteshvara, who is known in Chinese as Guanyin and embodies compassion.

By the fifth and sixth centuries, Avalokiteshvara, who could take thirty-three different forms or avatars, was one of the most widely represented Buddhist figures in Asia. The dramatic transformation depicted in this painting is most likely a reference to stories about Chinese monks whose spiritual development or enlightenment allowed them to take this popular form of the bodhisattva.

Yishao, the monk wearing black in the painting, was an abbot of the Huiyuan Temple in Ningbo in Zhejiang province, who wrote dedicatory inscriptions on several of the paintings in this set. The artist Zhou Jichang holds a pen, while the unknown individual holding a sketch is probably the patron who commissioned the set of paintings. 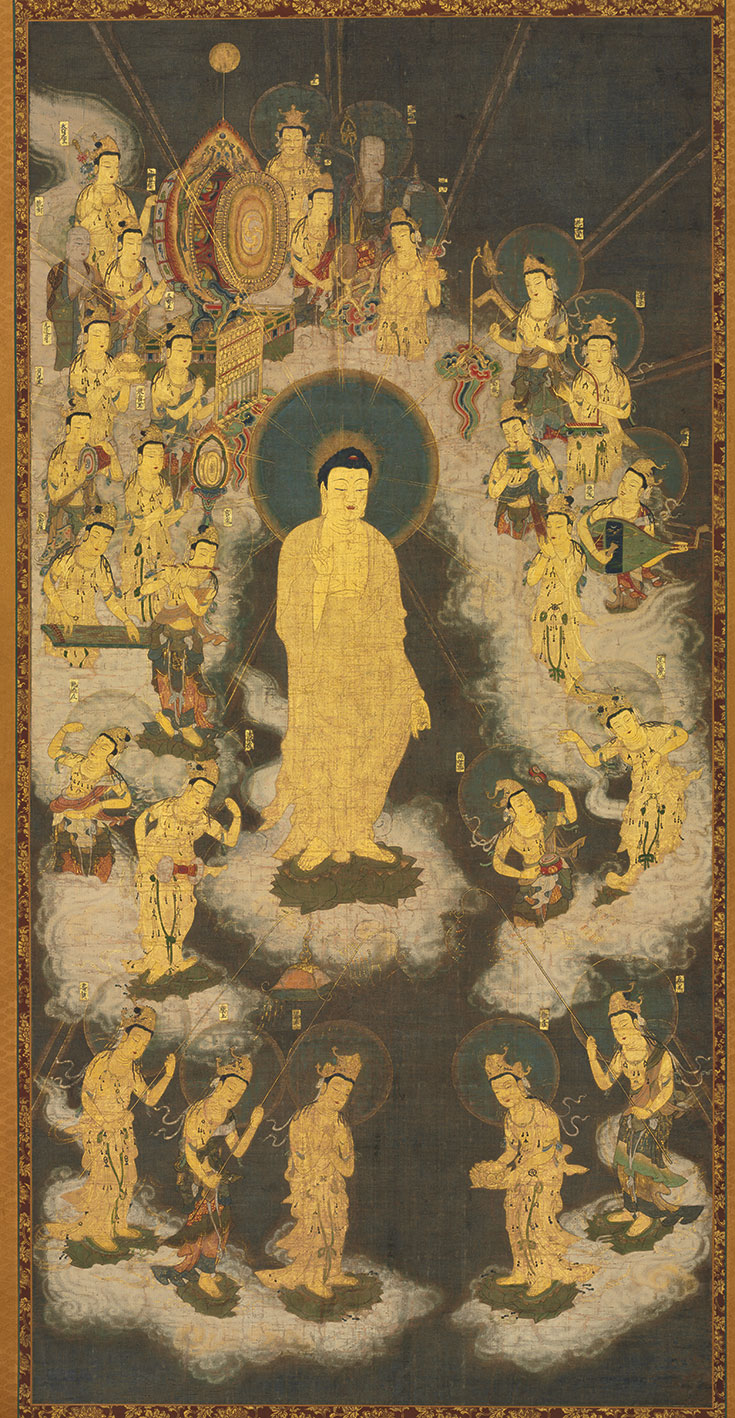 Fig. 4. Depictions of Buddha Amitabha and his enlightened realm play an important role in Pure Land Buddhism. Such artworks can be placed at the bedsides of dying people to guide them to rebirth in Amitabha’s Western Paradise. “Welcoming Descent of Amida.” Japan, Kamakura period, 1300–1333. Hanging scroll; ink, color and gold on silk. John L. Severance Fund. courtesy of the Cleveland Museum of Art.

Like the luohans, Buddha Amitabha, known in Japanese as Amida (fig. 4), plays a vital role in East Asia practices, particularly those centering on the desire for rebirth in his personal pure land or paradise. Each important buddha, such as Amitabha, or bodhisattva, such as Avalokiteshvara, creates and maintains such a pure land, an idyllic location where conditions are conducive to the achievement of enlightenment.

By the sixth century in China, and later in Korea and Japan, desire for rebirth in such a realm was a goal in certain practice traditions. In order to help an individual achieve rebirth in Amitabha’s pure land, which is known as the Western Paradise (Sukhavati), paintings depicting the Buddha Amitabha descending to earth accompanied by an entourage of bodhisattva-musicians (known as raigo in Japanese) were sometimes placed before a person’s deathbed. Occasionally, a string was attached to the painting and held in the hands of the dying person. The hope was that as the soul escaped the body, it would move to the lotus pedestal held by Avalokiteshvara at the lower right, and then be taken to the Western Paradise to await rebirth and, hopefully, enlightenment.

Mandalas and Deities: The Art of Tantra 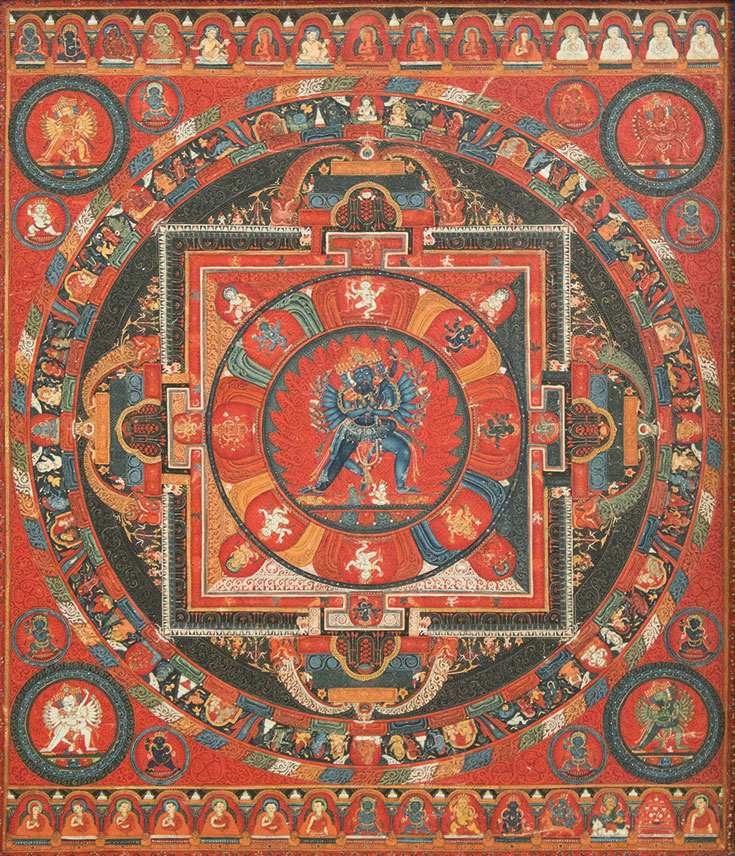 Fig. 5. In the Vajrayana Buddhism of Tibet, thangka paintings aid meditators in their visualization of enlightened deities and their environment. “Mandala of Hevajra.” Sakya School, 16th century, Tibet. Ink and color on cloth. Gift of Henry and Louise Loeb, 1982. courtesy of Metropolitan Museum of Art.

Cosmic diagrams, known as mandalas, first appeared in India in the sixth century, and became an important part of Buddhist practice in the eleventh and twelfth centuries. Used to define sacred spaces as well as for devotion, mandalas represent the cosmos as manifested through a specific deity and their entourage. In the tantric or Vajrayana tradition of Indo-Tibetan Buddhism, these sacred paintings (thangkas in Tibetan) are used as aids in visualization practice.

A fifteenth-century Tibetan painting of a Hevajra mandala (fig. 5) illustrates a palace-architecture mandala in which the most important deities inhabit a multi-level square structure in the center of the composition. The three-headed and four-armed manifestation of the main meditational deity Hevajra dances with his consort Nairatmya in the center of the palace, which has elaborate gates at the four cardinal directions. Members of this tantric practice tradition, including eight adepts, or mahasiddhas, surround the central palace. They preside over the charnel grounds that are often the site for tantric practice as they exemplify the transitoriness of existence. Additional manifestations of Hevajra appear in the upper and lower borders.

As is often the case with Tibetan thangkas, a mantra or sacred syllable (OM AH HUM in this case), is written on the back of the painting. It is interesting to note that the mantra on this painting is configured in the shape of a stupa (known as a chorten in Tibet or pagoda in East Asia). This is a reminder of the continuing importance of these first Buddhist monuments as signifiers of the immanence of the Buddha and his teaching, and as the starting point for an endless array of practices and images over time, throughout Asia, and ultimately, around the world.

Denise Leidy is the author of The Art of Buddhism and coauthor of Mandala: The Architecture of Enlightenment.