Joan Stamm on how the Japanese art of flower arranging taught her to appreciate her mother — and the seeds she planted in Stamm’s heart. 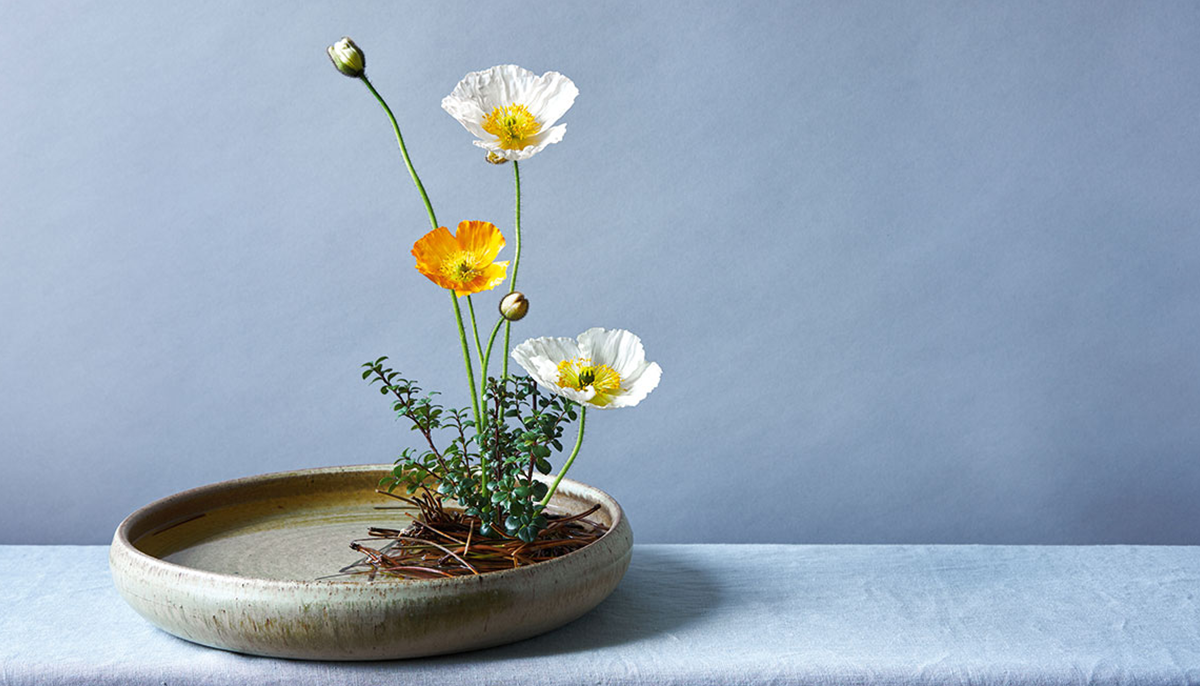 Saicho, the founder of Tendai Buddhism in Japan, once said, “True riches are not material things but that which shines light into a dark corner.” As I interpret it, lighting up a corner means using one’s own unique talents and passions to brighten a corner of the world.

Kukai, the founder of Shingon Buddhism, added another layer. He believed that the natural world, the world of trees and flowers, is enlightened. “Sentient beings” include not only human beings, but also plants.

These reflections, articulated by two Buddhist contemporaries of the ninth century, laid the foundation for the flower-temple pilgrimages of modern Japan: the practice of journeying to various temple gardens. I’d booked a flower-temple pilgrimage in Kyoto and Nara for April 2020. The pandemic altered my plans, waylaid my dreams. I stayed home that year, then the year stretched into three.

During the months of lockdown and isolation, I focused my love of nature—of gardens and flowers—on my own slice of the natural world: six and a half acres on a mountain, on an island in the Salish Sea. I spent the time reflecting on the evolution of my own predilection for flowers and how it had begun with my mother. She sought the light of the living world, of flowers mostly, and unknowingly passed that light on to me. Her passing of the torch got off to a rocky start.

In my family, my mother’s passion for gardening was invalidated and marginalized. That might sound strange or cruel or insensitive to an outsider but—being a member of “the tribe” who joined in on this marginalization—I’ll say in my defense that my mother’s love for gardening often seemed like a burden that we were forced to share.

She complained a lot about the hard work of gardening—planting and digging bulbs, dividing perennials, staking gladioli, and all the other tasks involved in growing award-winning flowers. Even her exhibiting at the county fair became another burden that involved me and the other family members who had to transport all those flowers, carry them to the car, carry them into the flower barns, carry them out of the flower barns and back into the car and into the house.

The drawer full of blue and purple ribbons was a testament to her skill. Did we, her family, nourish and acknowledge her corner of light? Not really. As is common in families, we all had various interests that went unnoticed and unacknowledged. Our corners were not lit. We plodded on, nobody ever getting or giving a crumb of praise or validation.

Now it’s many decades later, and having developed my own love of flowers in the form of ikebana, or kado, “the way of flowers,” I regret that it took me so long to appreciate my mother’s passion. Why didn’t I say anything kind about the labor of love she involved me in? Looking back, I was the typical self-centered American teenager. But unknowingly I absorbed something vital from my mother’s love for flowers: the spiritual kinship she had with living things.

Flowers represent the highest, purest expression of nature’s spiritual essence. Flowers are spiritual beings; they’re “little buddhas,” as the priests and abbots of the flower-temple pilgrimages in Japan say in their literature. It’s no surprise that as people lose interest in institutional religion, they’re turning to nature for solace. In the twenty-first century, temple grounds—once havens for spiritual pilgrims, and still blessed with untold centuries of prayer and aspiration—are becoming gardens filled with fabulous flowers and flower pilgrims: those who seek to touch their inner essence by journeying into nature. With their various shapes, sizes, colors, and unique characteristics, flowers symbolize the diversity of people.

For some today, a Buddhist icon doesn’t speak to their hearts, but a crimson peony does, or a white camellia in the middle of winter, or the pendulous racemes of a lavender wisteria, or that most exquisite and symbolic of flowers, the lotus emerging from the bottom of muddy ponds like a beacon of ephemeral light. According to Kukai and Saicho, flowers have buddhanature, so they can be our teachers, if we let them. If we notice. Flowers can teach us about patience, about being present through all kinds of turbulent weather, about grace, impermanence, and the naturalness and beauty inherent in aging and dying. Flowers transition from seed to seedling, to mature plant—budding, opening, flowering, withering, perishing, and composting—much akin to our own human seasons. Yet they do so quietly, without complaint. 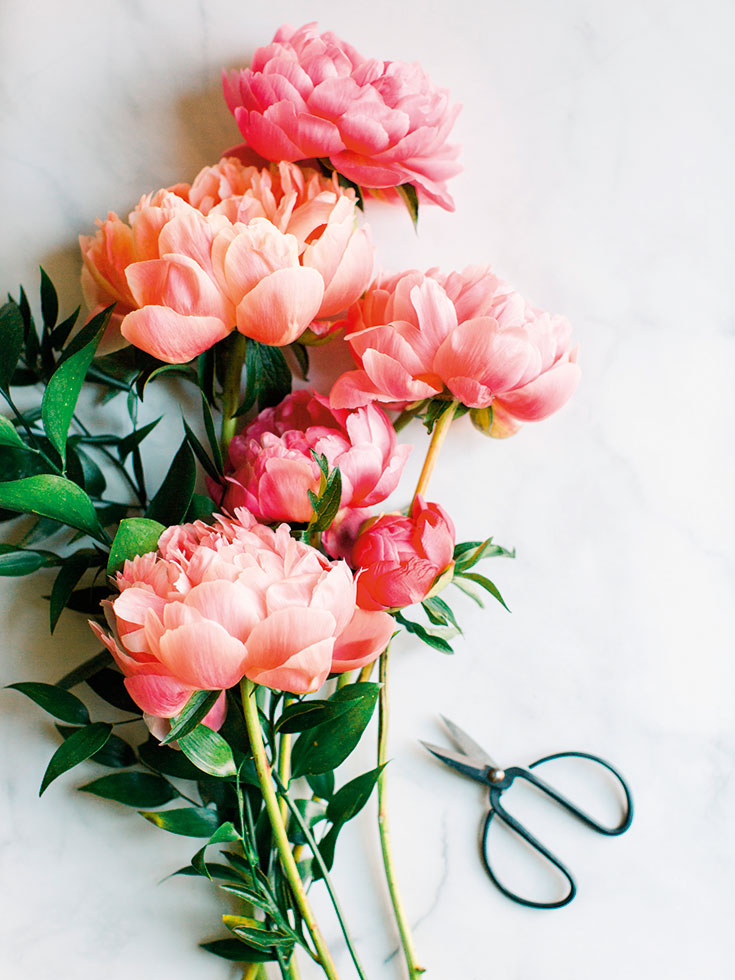 As the pandemic continued, and Japan’s borders remained closed to tourism, I continued to revel in flowers here at home, without temples, without famous gardens. I grew my own flowers or collected those of my neighbors and turned them into works of art, into ikebana. All the while, I admired from afar the temple priests, who began, twenty or thirty years ago, to offer more than funeral rites at their Buddhist temples. Offering flower-temple pilgrimages was a way they found to bring life back to their inherited and often historic compounds. During the height of the pandemic, knowing that these temple gardens existed gave me hope in the creative spirit and ingenuity of humans. We can transform the old into the new and give it fresh life; we can reaffirm that kado—“the way of flowers,” the way of being in and with nature—has no bounds.

My mother and I have taken different approaches to flowers. She derived great joy in propagating plants from leaf or stem. I derive great joy in designing with leaf and stem. And she didn’t have an affinity for Japanese culture or know a thing about Buddhism. Mother didn’t have a religious bone in her body. Yet the tranquility of her garden was akin to a church. Her garden was the place where she found and created a corner of light.

It has taken me many years to see and honor the part of me that is a seed planted by my mother. If she were still here, I might try to tell her. But then…maybe not. My mother and I rarely spoke the same language, and she wouldn’t have understood the magic of Japan and its Buddhist temple gardens. A farmer’s wife and homemaker, she had no experience of being in an ancient temple compound, contemplating the flight of a cherry blossom, the color of an iris, or the bluest blue of a hydrangea under a cloudy sky. But she would have understood the paradox that flowers conjure, that life conjures: even as we bring our light into the world, the melancholy and the joyous live side by side.

Joan D. Stamm is the author of The Language of Flowers in the Time of Covid: Finding Solace in Zen, Nature, and Ikebana. She’s a certified teacher in the Saga School of Ikebana.