There is a sacred dimension to growing old. In the face of aging and dying, says Olivia Ames Hoblitzelle, we can call upon practice to sustain and inspire us. 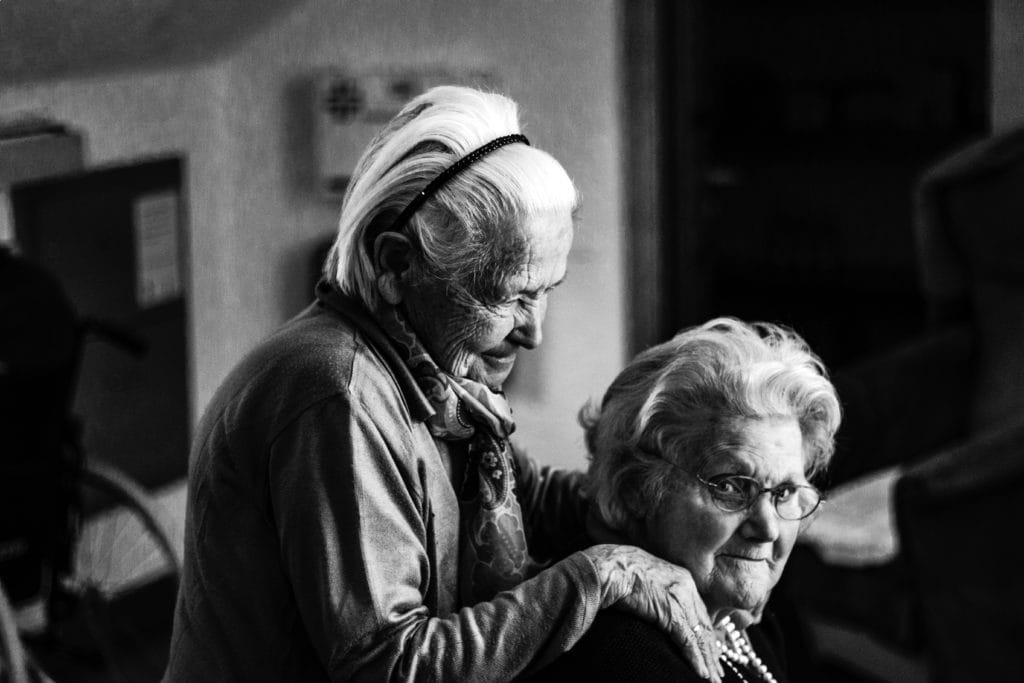 In the time of Shakyamuni Buddha, there lived a man in his eighties who had done little about his spiritual life, and so he set out to find the Buddha’s encampment, which he had heard was nearby. Looking like a beggar, old and hopeless, he arrived at the encampment and asked one of the senior monks if he could be accepted into the sangha.

After testing the old man’s attainment, the monk replied, “You are an old man and haven’t done any practice, so there’s no point in giving you teachings now.”

Completely dejected, the old man lay down in front of the door. When the Buddha came by, he asked the old man why he was lying there. The old man told his story, to which the Buddha replied: “Some of my monks don’t realize that just because the body is old, there’s still every reason to practice. All you need is courage and enthusiasm to study and meditate. I know you have insight and the roots of virtue. I will take care of you.”

The Buddha blessed the old man, and within a short time, that old man became an arhat.

That story, recounted by the Dalai Lama during a recent talk in New York City, offers encouragement to all of us who are moving along in years. Reinforcing the point, he went on to say: “There’s no reason to feel old just because the body is old. The mind can still be young and full of enthusiasm. We can have the courage to carry on our study and practice.”

As an elder himself, the Dalai Lama’s extraordinary presence touches countless people across the planet, whether they are Buddhist practitioners or not. What about the rest of us? How are we responding to the inevitable process of aging and diminishment? Where do our practice, study, and way of life fit in here? Precisely because we live in a culture that is in denial and phobic about death, I’ve been intrigued by these questions—even determined to find a path through old age that is inspired and sustained by practice. Consider the central Buddhist tenet of the three characteristics—dukkha (suffering), anatta (nonself), and anicca (impermanence). All three are beating the drum of our diminishing years. Time to wake up!

From the Buddha’s own culture comes the tradition of the ashramas, the four stages of life that are considered guidelines for wise living. After the student and marketplace stages comes the forest monk stage, the assumption being that when your children are adults and your career has reached fruition, it’s time to shift focus to your inner life, to go on retreat and deepen commitment to practice.

In today’s Western culture, we face many challenges to honoring the inner life, to shifting down from a fast-paced, accomplishment-oriented lifestyle to a more contemplative interiority and time for practice. We may not realize the extent to which we’ve been conditioned by the Western model, subtly driven by the compulsion of doing over being—a subtle addiction in itself.

Here’s where a short version of the five remembrances—phrases the Buddha recommended be repeated regularly or meditated on as a reminder of life’s ephemeral nature—can come in handy: My aging, physical diminishment, and death are inevitable; everything changes, and we must part from loved ones; my actions, or karma, are my true belongings, the ground upon which I stand.

Pema Chödrön condensed the five remembrances into three pithy phrases: Since death is certain, and the timing of death uncertain, what is the most important thing? That last phrase is particularly provocative, especially in our culture, freighted as it is with distractions like television, tweeting, and Facebook. The five remembrances also are reminiscent of the ancient art of memento mori, remembering that I will die so I can live to the fullest.

I’ve been inspired by two realizations: the first—both countercultural and radical—is to entertain the possibility that there is a sacred dimension to the process of aging. We recognize that time is precious. The richness of a life wisely led enriches our experience of everything.

While not romanticizing aging, dying, and death—often such a ruthless process—we can still regard this phase as a unique opportunity to call upon practice to sustain and inspire us. Though far from Western cultural norms, the last chapter of life can be seen as the most heroic. There we are with declining energy and perhaps a life-threatening illness, and that’s when we’re called to meet the greatest challenges of a lifetime.

And as the years accrue, the call to the inner life grows louder. Now our greatest ally proves to be the wisdom of the dharma and our commitment to practice. When I was in my sixties, my husband Hob, a longtime practitioner and ordained dharmacharya (senior teacher), was diagnosed with Alzheimer’s disease. From previous experience with my mother’s similar illness, I knew we were in the big leagues and that I, as his primary caregiver, would be facing Himalayan-scale challenges.

My first response was to call upon Tulku Thondup, a kalyana mitta, or spiritual friend, for many years. I knew he would respond with the kind of inspiration I sorely needed. At the very start of our conversation, he made an astonishing statement: “This will be difficult, but take it as a blessing, a teaching, a training.” A part of me couldn’t believe his words. A blessing? How could he say that? And yet, as the journey unfolded, this statement became one of the most compelling teachings I’ve ever received. It became my North Star, the dharma compass by which I negotiated the most difficult, sometimes harrowing situations. Basically, he was inviting me to frame everything that happened within the context of Buddhist teachings.

He went further, suggesting that I could approach even the humblest of activities as part of my practice. It’s easy to categorize our activities in terms of some personalized hierarchy of importance, but he shattered that illusion when he said: “Even as simple a gesture as giving someone a spoonful of food is practicing the paramitas (perfections). That action involves generosity, kindness, compassion, and the wisdom of no-self.”

During the six years of Hob’s illness, I returned to these two teachings over and over again. Furthermore, over time I was even able to find blessings amid this heartbreaking illness, for it was love—mine and everyone’s—that sustained us through the suffering more than anything else.

It is said that meditation is a preparation for dying, and Tulku Thondup had said those very words during our meeting. I then witnessed that preparedness in my husband’s moving toward death. Because of our many years of shared practice as well as his ease in speaking about his own death, we had talked together very openly about the subject. Then he had a series of episodes where he would unexpectedly pass out. The first occurred while we were having dinner at a restaurant. Unconscious for what seemed an interminable length of time, he lay in an ambulance with the EMTs shouting at him to break through his unconsciousness.

Then he stirred into a semiconscious state, and stated clearly, “Will you guys keep it down—I’m trying to die here.”

From the expressions on the their faces, I doubt they had ever heard that particular statement before.

The next day, Hob tried to integrate the enormity of the experience. “I practiced dying last night,” he said. “Now that I’ve died once, I can use that as my guide. There’s nothing scary here. If dying is this easy, no problem.”

From a Buddhist perspective, the process of aging consciously involves staying open to the sometimes harsh realities of what’s happening to the body–mind. It’s also about knowing what our inner resources are, and what will sustain and keep us inspired as we meet the challenges of later life. As we proceed through that unpredictable territory, our most valuable allies will be the support of the teachings, our dedication to practice, and the courage and enthusiasm that the Dalai Lama highlighted with his story of the old man and the Buddha.