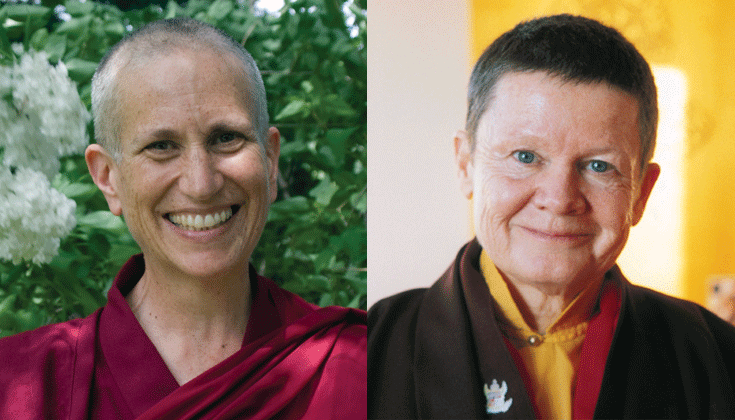 Eight North American Buddhist nuns, including Pema Chödrön and Thubten Chodron, have been awarded the Global Bhikkhuni Award for their achievement in promoting, protecting, and preserving the dharma.

According to a press release from Sravasti Abbey, the award was established this year to recognize Buddhist nuns’ achievements in teaching, establishing temples, encouraging education, creating Buddhist art, founding Buddhist charities, and offering healthcare services. It is presented by the Chinese Buddhist Bhikkhuni Association of Taiwan, a 300-member organization of Buddhist nuns. “Bhikkhuni” is the Pali word for a fully ordained female monastic.

Other North American recipients of the award include the co-abbesses of Aloka Vihara in California, Ayya Anandabodhi and Ayya Santacitta, as well as Ven. Pannavati, the co-founder and co-Abbot of Embracing-Simplicity Hermitage in North Carolina. Ven. Sudharshana, the most senior Theravada Bhikkhuni in the US, who is originally from Sri Lanka, and now resides in Florida, is also a recipient. Two nuns from the Chinese Mahayana tradition who are now living and working in the U.S have also been awarded. Ven. Zhi Ru Ng, who teaches Religious Studies at Pomona College in California, originally from Singapore, and Ven. Ru Dao, the Chairman of Hai Ming Temple, USA.

Bhikkhuni Pu Huei, the chairperson of the association, writes “We acknowledge that Buddhism is international and expanding, and women are at the forefront of that development. We understand that there are Bhikkhunis around the world who are working diligently in leading people to practice the Buddha Dhamma, and this we want to recognize and celebrate.”

Pema Chödrön, well-known author and resident teacher at Gampo Abbey in Nova Scotia, Canada, received full monastic ordination in 1981 in Hong Kong. Thubten Chodron was fully ordained as a Buddhist nun in Taiwan, and serves as the founder and abbess of Sravasti Abbey in Washington State. (Specifically, north of Spokane, Washington.)

The awards will be presented during the six-day Global Buddhist Awards Ceremony in Taiwan, beginning November 17. In total, 50 nuns from 15 countries will receive the honor.