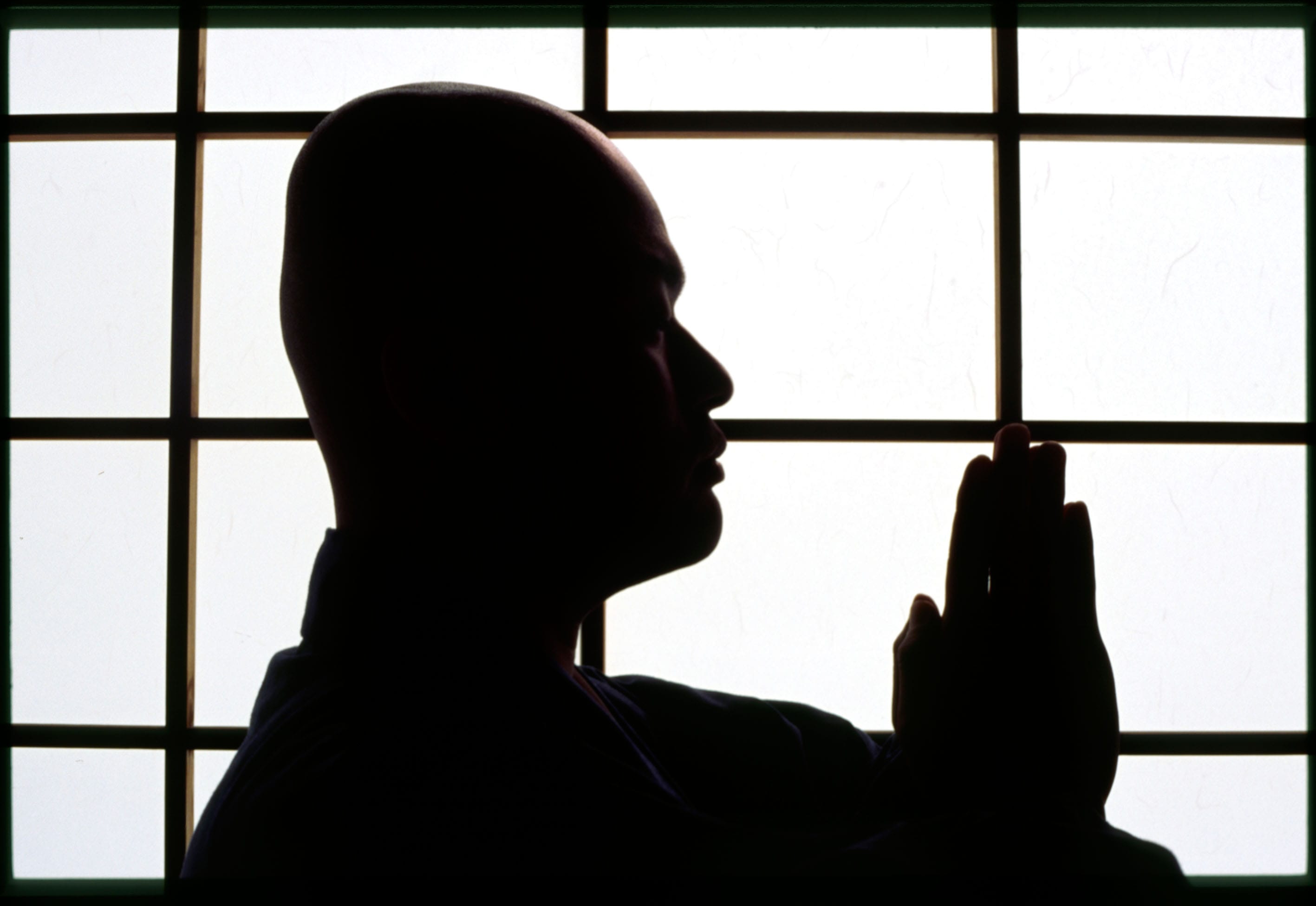 Steve Antinoff remembers his first teacher, an intimidating Zen monk whose every gesture seemed charged with the Absolute.

Round One (1972) Down for the Count: Jewish mystical literature recounts how a Hasid called Lieb chose his spiritual master: “I came…not to listen to discourses, nor to learn from his wisdom; I came to watch him tie his shoelaces.” The man I have chosen as my teacher has refused my choice. Yet, through his own magnificence, he has forced me up against the meaning of Lieb’s words—though he owns no shoelaces and though a pair of high-laced shoes tinged with this magnificence has tripped me up for decades.

I call this monk the Thief, in the Zen sense, for he has stolen the world. He stole it the first time I saw him, at 4 a.m. my opening morning in the monastery. He led the monks into the chanting hall; dropped into a sitting posture; chanted with the group of them for half an hour while I watched from the laymen’s side of the room; bowed a few times; led the monks back to the meditation hall; and while he was about it reduced the other monks to flat, two-dimensional cutouts by his mere presence. I’ve been trying to steal back the space about me and within me ever since.

But it was stumbling upon him brushing his teeth that turned him into a living Zen koan. I had stepped out of the meditation hall to find him standing by the water pump, hand on hip gazing into the distance, brushing his teeth before the evening meditation. I thought: “This is ridiculous. What he’s doing is trivial. What he’s doing is the meaning of life!”

I knew nothing of Zen. I did know whatever Zen is had something to do with this.

His sublime stillness when sitting, the way he handled a broom when sweeping the garden path, his several speeds and styles of “walking meditation” that made all yield to him silent control of the meditation hall—even when he was no longer head monk—are more beautiful to me, more crucial, than any painting or dancer I have ever seen. Later, in Tokyo, Sylvie Guillem dancing Maurice Béjart’s La Luna floored me. Tremendous as she was, great as Bach is, I could step around them. Try stepping past the Thief and you are struck down, and exhilarated. Aldous Huxley writes: “There comes a time when one asks even of Shakespeare, even of Beethoven—is that all?” The Thief snatches this question as he ambles past and stuffs it back into your gaping mouth.

How he steals it is a question without answer. For it’s not simply something he does. It’s what life does through him. D. T. Suzuki writes: “When a finger is lifted, the lifting means, from the viewpoint of satori, far more than the act of lifting. Satori is the knowledge of the individual object and also that of Reality which is, if I may so, at the back of it.” The Thief moves; his body seems a transparent chassis through which the power of the universe surges. Each action, each glance of the eye, sings—cosmically charged. And as a movement dissolves, the surging power that infuses it with life does not dissolve but infuses his next movement, and his next, shooting him full of vibrancy even as he cleans his teeth.

I used to trail behind him like an amazed five-year-old, trying to comprehend how gestures so insignificant could be The Absolute. If he felt my presence, he would turn and look at me as if I were nuts. Yet his actions said what the headless torso of the statue of Apollo demanded of Rilke: “You must change your life.”

That he could negate another’s existence while brushing his teeth would not have entered his mind. I watched his mop ballet along the monastery corridor, one mop per hand. I watched him veer round and with total nonchalance ax one log after another immaculately down the center, though I later learned he had bad eyes. I watched him in one seamless thrust slip out of his sandals, hoist himself onto the sitting platform, form his legs into the full lotus position without using his hands, and with one flick of his fingers crease his robe and kimono under his knees and descend into meditation.

The other monks in the monastery, as they headed toward the daily interview with the master, leaked subservience, doubt. When he struck the mallet against the epicenter of the gong and strode toward the master’s chamber, his movements alone said: “I’m coming! Be warned!” I have never gotten over his moving, or his stillness. He made visible, casual as a tossed peel, what I have sought the entirety of my adult life: an act that disclosed, as his did, the beginningless, endless life-death force that is infinity.

The Thief is wild about meditation. This is a problem each evening when I enter the meditation hall. All the other meditation hall chiefs I have known arrive last, a minute before they are obliged to ring the bell that begins the evening sittings. The Thief arrives first, sitting alone in the empty hall long before any of the monks enter.

There are rules in the meditation hall—lots of rules—and there are customs. That the hall chief is entitled to arrive last, after all the other monks are settled on their cushions, is one of the customs. That everyone who enters the hall, before proceeding to his own cushions, must walk to a specified spot on the floor two meters away from the chief monk’s sitting platform and bow before his cushions is one of the rules. This bow is mostly an empty gesture executed before empty cushions, since all the monks who later succeed him as chief do everything possible to reduce the time they have to spend meditating and invariably avail themselves to the prerogative of arriving last. Not the Thief. When I enter the darkening hall, hard rubber sandals slapping against the stone floor as I advance to make my bow, he is already seated, a mighty presence lost to the world.

Well…not quite lost, and this is the difficulty. The Thief has the unnerving talent of wearing two faces concurrently while he sits atop his cushions. Face one shows him utterly gone, so remote from the hall he couldn’t care less about me and my puny meditation. Face two glowers at me the moment I am in his field of vision and cuts me to shreds. Even when my upper torso is parallel to the floor I feel his glance crushing me with my unfreedom. Any doubts about this are dispelled the instant I raise my trunk and confront his eyes boring without mercy, cool and mocking, into mine. Yet never can I shake the suspicion that this is all a mask, that the Thief is too absorbed with what made him quit teaching school and become a monk to be bothered with the likes of me. The first face says: “You’ve got that right!” The second face, the one I would like to dismiss as a mask, winks (without moving an eye) and says: “You didn’t come thousands of miles to a Zen monastery to bullshit yourself, did you?”

The Thief does not care about my love life, or what books I have read, or if my Japanese is coming along. He terminates me at a single point, always the same point, the point where I attempt to live. If our eyes never met again he would not give me another thought. Since they do, he forms himself into a koan that I can avert only by awakening to the Zen Self or by keeping the hell away.

Excerpt from Reports from the Zen Wars: The Impossible Rigor of a Questioning Life,
by Steve Antinoff, Counterpoint Press; 288 pp., $16.95 (paperback).