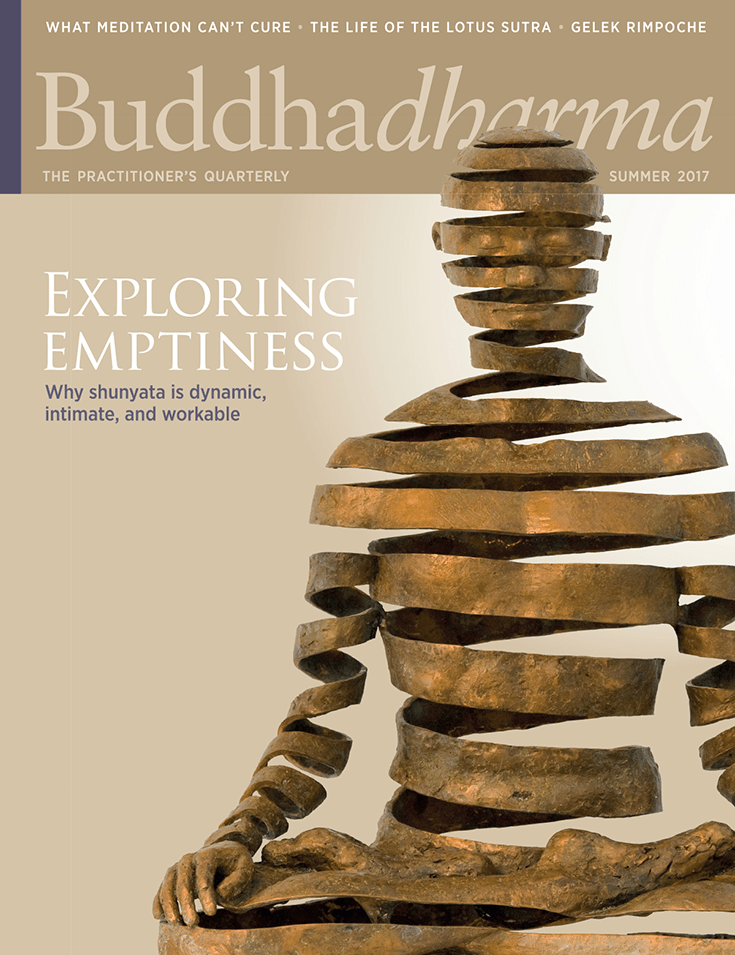 The Summer 2017 issue of Buddhadharma is available now. Preview the magazine contents and sample articles below.

In his commentary on the koan “Dasui’s Aeonic Fire,” Norman Fischer takes on the end of the world. It’s happening right now, he says, but probably not in the way that you think.

Gelek Rimpoche passed away in February at the age of 77. Dimitri Ehrlich remembers his teacher’s generosity.

This Rare and Precious Life

We have been given an incredible opportunity for enlightenment, says Gelek Rimpoche. We should practice as if we believe it.

There, There — It’s All Empty

The teachings on shunyata, or emptiness, are a cornerstone of Buddhism—and they’re frequently misunderstood. Ari Goldfield, Daijaku Kinst, and Guy Armstrong discuss what emptiness is, what it isn’t, and why it ultimately points to an experience that is dynamic, intimate, and workable.

Emptiness without wisdom can lead to nihilism, explains Dzongsar Khyentse Rinpoche. That’s why we have the teachings on buddhanature.

We Walk the Path Together

The Buddha never intended awakening to be a solitary pursuit, says Larry Yang, so why do many Western practitioners resist spiritual community? He invites us to explore the value of sangha—and our cultural biases around it.

Meditation wasn’t designed to heal early psychological wounds, explains Debra Flics. She cautions us not to look to it as a replacement for psychotherapy.

Jeff Wilson / Why Buddhist Communities Should Include Children

Not a Moment to Lose, by Andrew Olendzki

Right Where You Should Be, by Diane Hamilton

Let It Break, by Elizabeth Mattis-Namgyel

The Test of Time, by the Dalai Lama

Dharma Isn’t the Only Gift That Matters, by Bhikkhu Bodhi

We’re Only Human, by Ajahn Sundara

A Thousand Hands: A Guidebook to Caring for Your Buddhist Community edited by Nathan Jishin Michon and Daniel Clarkson Fisher; Review by Pamela Ayo Yetunde

Patriarchs on Paper, by Alan Cole

Right Thoughts at the Last Moment, by Jacqueline Stone

The Suttanipata, translated by Bhikkhu Bodhi

Catherine Toldi / Me and My Imperfect Teacher